Posted by Clint on Thursday, 22 November 2018 in Movie Reviews

Plot: Robin of Loxley returns from war to a very different Nottingham than when he left, and must work with a small group of people to try to bring down the evil Sheriff 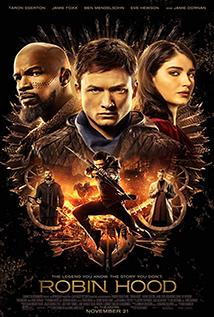 I think that Hollywood is slowly forgetting how to write a proper hero. Several times this year I've sat through films where the "hero" does nothing on his/her own, but simply reacts to the environment presented before them. A true hero is proactive, not reactive. They figure out a way, against all odds, to overcome the bigger, badder, evil that no one else can vanquish.

This Robin Hood is no hero.

He spends the entire movie, save for literally one minute, following the orders and wishes of everyone else in the film. He never makes his own way, until one point where he says "I have a plan," and unfurls a map in front of his gang. And that's it. That is his one shining moment as the hero.

There are some good things about this movie. First, Taron Egerton is in it. He's great in just about everything he does, even in a bad movie. Second, there are a lot of great action scenes. Third, the music is awesome. And finally, there is some great, witty banter between the characters. If the story had been better this could have been an outstanding film.

If you are a fan of the Robin Hood tale, you may want to skip this one. It might leave a bad taste in your mouth. If you are a Taron Egerton fan, by all means, get to the theater right away and enjoy.