SCARY STORIES TO TELL IN THE DARK - Review

SCARY STORIES TO TELL IN THE DARK

Plot: A group pf teens find a book in a suspected haunted house, and the stories inside the book begin to come true 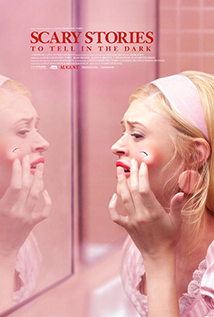 This is about as middle-of-the-road horror flick as you can get. It's not overly scary, it's not mind-numbingly stupid, but it also never really goes anywhere innovative or exciting. It just sort of happens.

It feels like a lot of the cast and crew were just going through the motions while making this movie. There are several scenes that are shot poorly, or have bad acting, or terrible lighting. The characters aren't very compelling, in fact it is pretty difficult to care about any of them. And the scary figures are more laughable than creepy.

There are a couple of suspenseful moments, and there is one interesting twist that happens, but it is never explained. If they had expanded on that twist some more this could have been a much better film.

This one is okay, but it isn't worth theater money. Save that for films like IT CHAPTER 2 (which will hopefully be as good as the first one). This film will be fine to see on your computer screen a couple of months from now.