Posted by Clint on Friday, 21 December 2018 in Movie Reviews

Plot: An artist uses dolls and an elaborate set to cope with life after he is horribly beaten and left for dead 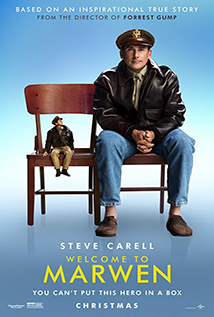 This story has so much potential. It is a fascinating and powerful true story, unfortunately the film does a horrible job of making it come to life in a way that isn't awkward and just plain weird.

The worst part of this film is that it actually gets really good for the last 15 minutes. Unfortunately, there are 90 minutes of a really bad movie before you get there. It's not worth the wait.

Steve Carell does a good job with the roles he plays. He's proven that he can be a great dramatic actor as well as a comedian. It's too bad that this movie doesn't showcase his talents better.

The other issue with the film is that every scene feels like the timing is off. The dialogue comes too slow, the cues are mistimed, and the transitions are awkward.

The best way I can describe watching this movie is to use the movie itself. Imagine how awkward you would feel if you were an adult playing with dolls in your front yard while other people watched. There you go. That's what it feels like to watch WELCOME TO MARWEN.

Posted by Clint on Wednesday, 22 November 2017 in Movie Reviews

Plot: A man recruits two of his old war buddies to help him bury his son killed in battle

This may be the most emotional buddy road trip film ever made. It is a powerful film that will break your heart while your heart fills with pride. It's a complex narrative that demands your attention, but giving your attention isn't difficult because the acting is so impeccable.

While this is not an easy film to watch it still has many moments of laughter and joy. But it also has an underlying current of guilt and regret. In true military fashion, a lot goes unsaid, but the message is still conveyed loud and clear.

The only problem I had with this movie is that it is 20 - 30 minutes too long. The second act drags out to the point where I was starting to look at my watch. There were several scenes that could have had the same impact even if they were cut down or cut completely from the finished product.

While all three of the main characters are outstanding in their roles, Bryan Cranston delivers a performance that could win him several awards this year. Steve Carell's portrayal of a calm, but broken man will tear into your soul.

If you are ready for an emotional ride, LAST FLAG FLYING will get you there. Just know, you'll be in that place for a while even after the credits roll.

BATTLE OF THE SEXES - Review

BATTLE OF THE SEXES

Plot: Based on the story of the famous tennis match between Bobby Riggs and Billie Jean King 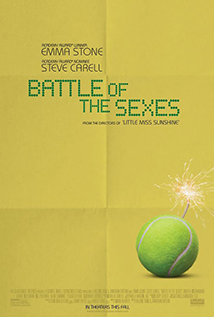 I was really looking forward to seeing this movie for several reasons. First, the real-life match has lived on in infamy for 40-something years now. Second, Emma Stone and Steve Carell are two of my favorite actors. And finally, who doesn't like a good-natured man versus woman story?

Then I saw the movie. (Insert The Price Is Right loser sound here).

The trailers made this movie look like it was going to be all about the match and the lead up to the match, instead we get a long slow story about their relationships and the endless fighting BJK had to do for equal pay. (Don't get me wrong, those are interesting and valid story lines, it's just not what we were sold with the trailers).

If you ever saw any of the coverage of the press conferences Riggs and BJK had, you know that there is a lot of material there for an interesting story. The film does a really poor job at getting into the rivalry between Billie Jean King and Margaret Court. It touches on it, and it feels like it is a significant part of the film, but it never goes anywhere but a surface rivalry.

Stone and Carell are outstanding in their performances. Unfortunately, they were given a bad script with which to work. The rest of the cast is fine, but even the main secondary characters are hardly developed.

If you go see this movie, just know going in that it is a slow-moving, relationship-heavy story, rather than the fun, funny, and exciting film we see in the trailers.

Plot: Gru finds out he has a twin brother who wants to get Gru back into the world of crime 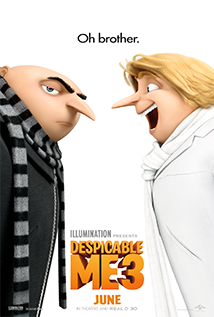 This franchise just keeps on putting out great movies. And not only are they fun for kids, but they are entertaining for adults, too.

For those of you that were drawn to the family story of the first film, you'll get that story line again, and it's just as good the second time. Also, there may not be a cuter character in movie history than Agnes. Dying from the cute is a strong possibility while viewing this film.

Once again, the animation is superb, the minions are hilarious, the story is entertaining, and the pacing is near perfect. I took my 7 and 5 year old daughters and neither of them were squirmy for the full 90+ minutes. It's quite a movie that can pull off that feat.

I will say there were a few scenes that the 5 year old found to be too intense, but the 7 year old loved every minute of it.

If you are looking for a fun outing with the family, look no further than the theater. DESPICABLE ME 3 is well worth your entertainment dollars and time.

Posted by Clint on Wednesday, 23 December 2015 in Movie Reviews

Plot: A group of financial geniuses bet against the housing market in 2008 and win big This is easily one of the best films of the year and should be the front runner for Best Comedy as well as many of the Best Supporting Actor nominations. It may even see nominations for Screenplay and Director.

When you hear that this is a 2-plus hour movie about the housing crash of 2008 you would think that it would be the most boring, slow-moving film, but it is actually very exciting and enthralling from beginning to end. The way they deliver the boring information is done in such a unique and fun way that you almost can’t help but be happy to be learning about lame economic terms.

Steve Carell and Christian Bale give outstanding performances. And the cameos are almost the best part of the movie.

I highly recommend seeing it.