Posted by Clint on Thursday, 15 July 2021 in Movie Reviews 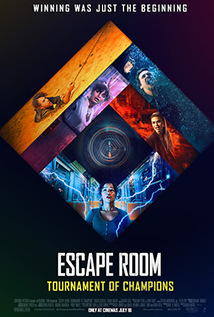 If you saw the first film in this franchise you know exactly what to expect out of this one. And it will give you exactly what you expect. Nothing more, and nothing less.
Just like the first film, the characters are drawn into the game in an unsuspecting, but very high stakes way, and from then on it's a frantic race to find all of the clues and escape before they all die. It does have several moments of suspense, and there are a couple of twists along the way that make the story more compelling, but it is essentially the exact same film as the first one, just with updated rooms.
There are a lot of good things about this film, but there are a few things that lessen the story and suspense. For one, it gets extremely annoying that the characters are always screaming as they are trying to figure out the clues. I get that it is a high stress environment, but the screaming is so annoying and over the top. Also, some of the clues are nearly impossible to figure out, but they always manage to get there. And finally, while this film does advance the overall story of the franchise, this film is essentially a replica of the first one.
Aside from that, and a few plot holes that always pop up in movies like this, it is a fairly entertaining and fun flick. If you want to spice up your movie-going experience, but you don't want to go to a full on horror movie, this one is a good choice. Just don't expect too much out of it and you won't be disappointed.
Tagged in: 2021 Escape Room: Tournament of Champions Logan Miller Suspense Taylor Russell
Continue reading
Hits: 455 0 Comments

Posted by Clint on Thursday, 20 August 2020 in Movie Reviews

WORDS ON BATHROOM WALLS
Rated: PG-13
Release Date: August 21, 2020
Director: Thor Freudenthal
Stars: Charlie Plummer, Taylor Russell, Walton Goggins, Molly Parker
Plot: A teen boy suffering from schizophrenia tries to cope with high school with the help of the schools smartest person
Trailer
Clint Says: A must-see film, one of the year’s best
Opening wide in theaters.
I know it's been a weird year and there haven't been nearly as many movies released as there are in a typical year, but this is one of my favorite films of the year. And I think it would still be one of my favorites if this were a normal year.
This film will have you doubled over in laughter one minute and ugly crying the next. It is wonderfully told, beautifully shot, and filled with deep characters.
This film deals with mental illness in an interesting way. Personally, I loved it, but I know people that hated it. It is obviously just a matter of taste as to how you feel about it. I don't want to spoil anything, so I won't say any more about it. You'll just have to judge it for yourself.
The best aspect of this movie is how it perfectly shows the effects of mental illness on the person, but it also shows the effects on their loved ones as well. If you or someone you love is dealing with mental illness this film may help you understand how the people around you are feeling. For that reason alone this is a movie worth seeing.
I'm also a sucker for first love stories and underdog stories. This movie combines both of those, so I have no choice but to love it. This isn't the kind of film that will be winning awards, but it is one that can touch your heart and move you. And, to me, that is even more important than winning a trophy.
Tagged in: 2020 Charlie Plummer Taylor Russell Words On Bathroom Walls Young Adult
Continue reading
Hits: 548 0 Comments

Posted by Clint on Tuesday, 26 November 2019 in Movie Reviews

Plot: A family's life takes a turn after a tragic event 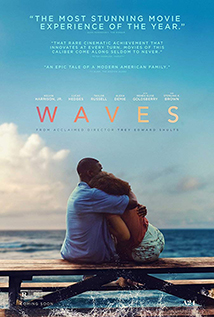 This is one of the more interesting and unique films I've ever seen. It is very good, but I'm still not sure that I liked it, and I'm still not sure if the final cut is done well. Honestly, I may never come to a solid conclusion on this movie.

WAVES is just over 2 hours long. The first half is dedicated, almost entirely, to the story of the son/brother in the family. The second half gives us new main characters and a story line that follows the daughter/sister. It almost feels like two different films. I wonder if it might have played out better if they had focused on one of the stories and either started or ended the chosen story with 10-15 minutes of the other one instead of splitting the screen time 50/50.

The dual story issue is odd, but almost everything else about the film makes it great. The acting is amazing. In fact, I would be shocked if there weren't some acting nominations to come from this movie. The writing is also very powerful and moving.

Technically speaking, this film is pretty average. There are a lot of weird camera movements and lens flares. Some of them would have been cool, but there are so many that it gets annoying. For example, we spend the first several minutes of the movie seeing everything through the eye of a spinning camera. Yes, it's a neat shot at first, but then it becomes a gimmick, and then it quickly turns off putting. It could have been a much more powerful film if it didn't try so hard to be artsy.

This is a poignant and powerful film that will poke around at all of your emotions. It's not the easiest film to watch, but it is one that you will be glad you saw after it is over.