Plot: A poor farm girl tries for fame and freedom by auditioning for a major singing competition 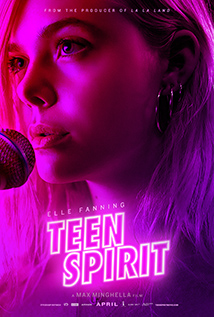 While this isn't a bad film at all, it feels like it missed it's production window by about eight years. I know that singing competitions are still popular, but they are nothing now compared to a few years ago when they were just about the only thing people talked about when it came to TV.

Elle Fanning is incredible in this role. She pulls off a foreign accent, a foreign language, and she even sings all of the songs herself. For an actor to do any one of those things is pretty good, but to nail all three is exceptional.

The thing that bothered me most about this film is the tone. It's about a girl going to a massive singing competition, it should feel exciting and overwhelming, but instead the whole thing is toned down like we are on a morphine drip during our own birthday party.

I think this film could have been great if it was just a little more up and fast-paced. It is worth seeing just because of Fanning, but the story may leave you wanting more.