THE GIRL IN THE SPIDER'S WEB - Review

THE GIRL IN THE SPIDER'S WEB

Plot: A hacker is tasked with destroying a dangerous computer program before it falls into the wrong hands 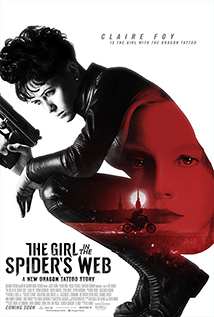 I'm not sure why almost all European-based mystery/action films are so slow and deliberate. This one is no exception. That isn't to say that this is a bad movie. On the contrary, this is actually a pretty decent film. It's not going to blow you away, but it will keep you interested for almost the entire length of the film. However, it plods along at a pace that is a bit too slow for most movie-goers.

Claire Foy does a fine job taking over the role from Rooney Mara. She portrays the complexity of her character with great skill. Even while you see her have the strength to stand up against a massive foe, you can also see that she feels insecure and alone.

The mystery is good despite using several of the same tired tropes we see in so many films like this. (The bad guys are all trying to get their hands on a bunch of nuclear weapons to destroy the world). It could have been outstanding if they had made it a bit more reckless and fun. It is a bit too dark and depressing to be an entertaining movie.

For those of you that saw the first film in this series and don't want to see this one because of the graphic nature of several scenes, just know that this one is much tamer. If you liked the first one you should give this one a shot.