THE HATE U GIVE - Review

Posted by Clint on Monday, 15 October 2018 in Movie Reviews

THE HATE U GIVE

Plot: A girl must learn to stand up for herself and her community after her friend is is tragically killed by a police officer 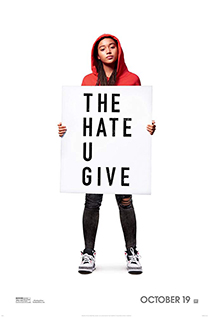 This was one of the biggest and most powerful books in the Young Adult genre in 2017. It came at a time and covered issues that were, and still are, some of the most important and passionate of the day. Now, 20 months later, it is a powerful and moving film that hits hard on those same issues.

Amandla Stenberg and Russell Hornsby give performances that will shake you to your core. They portray the feelings of hurt, loss, and desperation in beautiful yet painful ways. Their characters are also complex. Nobody is perfect, everyone has flaws and issues that muddle up the situations and give all sides valid arguments.

The story itself is emotional and powerful. If you aren't crying at some point during this film you may want to check your pulse.

The movie version is a bit different from the book, but the changes are things that make the story much better visually than in the written word. I don't think that fans of the book are going to be upset with the changes.

This is the kind of film everyone should see at some point. To see the issues of race, justice, social justice, and family play out this way is eye-opening. It is the kind of movie that might have the ability to move people out of their comfort zones and look at life through someone else's viewpoint.