Posted by Clint on Friday, 10 August 2018 in Movie Reviews

Plot: Scientists accidentally discover and release a massive shark into the ocean and must stop it before it destroys everything in its path 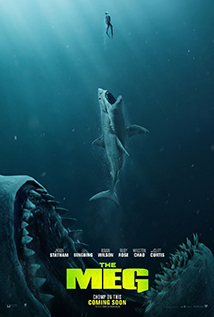 There isn't much to say about THE MEG other than it is stupid, ridiculously awesome fun. That breaks down to about 20% fun, 10% awesome, 20% ridiculous, and 50% stupid.

I don't say this often, but this is a movie that was begging to have an R rating, but they pulled their punches and made a PG-13 flick. It's okay as a PG-13, but it could have been so much better worse more if it were rated R. At least then we would have been able to see some more shark action.

Obviously, this is not a thinking person's movie. Just go to the concession stand, trade your brain for a massive bucket of popcorn, a big bag of candy, and a drink (alcoholic in nature is completely appropriate and recommended). It will make the film so much more enjoyable if you spend the time stuffing your face and not concentrating on things like plot.

If you are into monster movies you'll enjoy this one. It won't be anyone's favorite, but it will give you a few good moments of suspense and a few laughs.