Posted by Clint on Monday, 11 February 2019 in Movie Reviews

Plot: A young boy shows signs of being a genius, but there is also a dark side to his gift 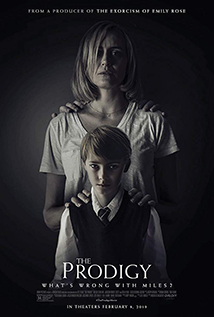 This isn't a great horror flick by any stretch of the imagination. The good news is that it isn't terrible either. If you are in the mood to be scared, this film will satisfy.

The best part of this movie is that it doesn't rely on jump scares, the story is creepy enough to tingle your spine. It could stand to be a little bit scarier, but it's better than average when it comes to the creepiness factor.

There are two big issues with this movie. The first is that they use a lot of conveniences to get through the story. They introduce a certain sciency plot point, but then they alter the science behind it several times to keep the story moving forward. The second is that the big reveal is so obvious that you'll be pretty annoyed that it takes the hero so long to figure it out. It can't even really be considered a twist because it seems so obvious to everyone except the people in the movie.

The good news is these issues can be somewhat ignored and the movie can still be enjoyed on some level. I don't think this movie is worth the price of a theater ticket, but it is one worth seeing on your couch with all of the lights off.