Posted by Clint on Thursday, 04 October 2018 in Movie Reviews

Plot: A former investigative reporter is called into a lab where people are dying, and soon finds himself in the middle of the experiments 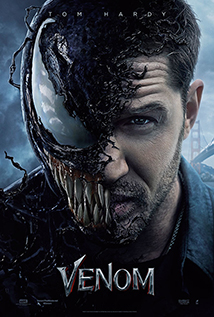 Well, that was a bummer.

I walked into the screening of VENOM with high hopes. The MARVEL movies are almost always worth seeing, Venom is an interesting character that could make for some wild scenes, and Tom Hardy is one of my all-time favorite actors. What could go wrong?

That's what could go wrong. And, it did. It went VERY wrong. I went with a buddy of mine who just happens to direct feature-length films and he said something to the effect of, "that was the most boring first act I've seen in a long time". I agree with that assessment.

20 minutes into the film I was DONE as were the several people around my that I could hear loudly sighing every time the film did something else to disappoint us. I didn't even care anymore that Tom Hardy and Michelle Williams were starring. I was just ready for the final credits and hoping for a good end-credit teaser scene. (Of which we got two).

Riz Ahmed plays the bad guy. He was as boring as everyone else and he didn't even have a character arc. He had a character straight-as-an-arrow line. His character might as well have been played by a robot.

Then there were the bit players who were terrible. I'm not joking when I say this is some of the worst acting in a high-budget film that I've ever seen. I don't think the director had any idea how to coach people into decent performances, much less something good.

Throw on top of all of that heaping pile of mess that we don't even get to see Venom until almost an hour into the movie, and it becomes a flick that isn't worth a free digital download. With the massive plot holes, it makes this almost unwatchable.

The only saving grace for this film is that we do get a few fun scenes with Hardy and Venom. But in the grand scheme of things those few scenes aren't worth sitting through the rest of it. Even the climactic scene is a complete waste of time and CGI talent.

Let's all just hope that Venom shows up in some other MARVEL flick that is actually worth seeing.